Dozens of buried 20mm WWII rounds discovered in the Midlands

1st Line Defence have been providing UXO Support this week to excavation works at a former Royal Ordnance Factory (ROF).

The facility was constructed at the start of the WWII, and tasked primarily with the production of small arms ammunition – 20mm cannon rounds, fuzes, and main charges for bombs and projectiles for the Royal Navy, British Army and Royal Air Force.

It is estimated that over a billion items were produced until its closure in the late 1950’s.

We had previously undertaken a Detailed UXO Risk Assessment for the site location, obtaining old plans, photographs and written records which indicated that the works site was part of the old ‘Proofing Range’ of the factory.

Records showed that hundreds of thousands of items of UXO had been recovered from the general area by Army explosive ordnance clearance teams in the 1970’s and 1990’s.

We deemed that there was still a significant risk of encountering UXO given the particular history of the site, and recommended that appropriate UXO Risk Mitigation measures were put in place.

So far during the support work, we have recovered dozens of buried 20mm rounds – both live and inert – which are being safely disposed of.

Despite its larger size, this type of munition is sometimes mistaken for more regular small arms ammunition, despite often having both a fuze and high explosive content – potentially making it a much more dangerous item – as outlined below.

If you encounter these or any similar types of ammunition during site works or in any walk of life, it is important never to touch or interfere with them in any way. Finds like this should always be reported so that they can be dealt with safely.

During WWII, there are two distinct types of 20mm ammunition – the Hispano and the Oerlikon.

The difference is clear by comparison of the cartridge cases, but commonly these rounds are found without the casing. 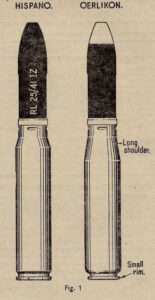 In both cases, a complete round consists of a projectile secured in the mouth of a cartridge case containing a propellant charge and a percussion cap. They come in three common types:

These type of projectiles serve various different purposes, for example:

All of the explosive projectiles were fitted with direct-action percussion fuzes, detonating on impact.

The fuzes should never be removed from the projectile, or dismantled or interfered with in any way – as a serious accident is liable to occur. 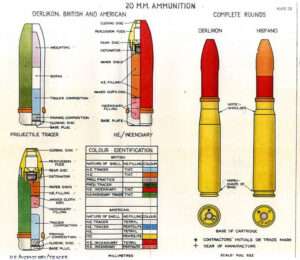 If you have any questions about UXO Risk Assessments or UXO Risk Mitigation services in general, contact one of our Sales Team on +44 (0) 1992 245020 or info@1stlinedefence.co.uk