Recent news stories from Guernsey, in the British Isles, have reported that Unexploded Ordnance (UXO) that was found by local divers (near the entrance to St Peter Port Harbour just before ‘lockdown’) has been detonated by a specialist Royal Navy team in a controlled explosion.

Coincidentally, just a few hours later, a second item of UXO (of the same type, about one-metre long and half-a-metre in diameter) was also found only a short distance away from the first discovery – both weapons have now also been safely disposed.

It is understood that both devices were British WWII-era 250lb air-delivered anti-submarine weapons, similar to the one shown in the diagram below. 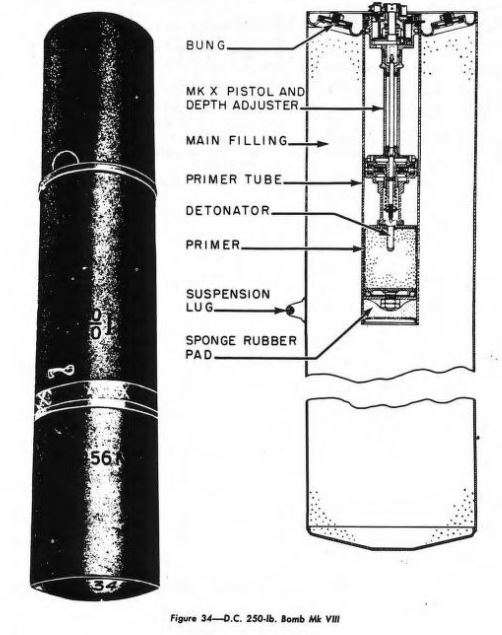 Guernsey’s Harbourmaster, Captain David Barker, reported that the condition of both devices had deteriorated significantly over the past 80 years. He speculated that they may have been dropped by the same aircraft, possibly carrying out an attack on a vessel that was in proximity to the harbour.

He commented that it was plausible that the blast from the first explosion, which caused buildings to shake – had unearthed the second.

Captain Barker continued: “You could tell from the reverberations on land and the plume of water at sea that there was a significant amount of explosives in there.”

A survey of the wider seabed around Guernsey for other wartime items of UXO would be “an enormous task” that would be unlikely to happen. Which puts the onus on local divers and others who encounter other suspected items of ordnance, at land or on sea, to be extra vigilant.

Captain David Barker commented: “There is no doubt that there are more of these out there, not just at sea but on land.”

“If people do come across anything that they are even slightly suspicious about, they should contact the Police.”

What are Depth Charges?

With the emergence of submarines at the turn of the 20th Century, military leaderships had to develop tactics and weaponry for fighting and destroying them.

The first ‘depth charges’ were created in the UK in 1914, and were soon adopted by the Royal Navy.

They comprised barrel-shaped devices filled with TNT or amatol which were deployed over the side of a ship, near to where it was thought an enemy submarine was located.

The weapon would detonate at a pre-selected depth, creating a huge pressure wave which could be effective at compromising the hull of a submarine even at a distance from the explosion.

Accuracy of deployment was a perennial problem however, projectors were later developed which threw the charges away from the ship and its wake – which increased efficiency.

Later still, depth charges were developed which could be deployed directly from an aircraft.

These aircraft-delivered devices (such as the D.C. 250lb shown in the diagram further above) consisted of a cylindrical metal case with an explosive charge, and a central tube which housed a primer, a detonator and a tail pistol.

The depth at which the charge would detonate would be determined by the pistol, which operated by hydrostatic pressure. The DC 250 was filled with 160lb of high explosive, and could be dropped from a maximum height of 500ft and a maximum speed of 173mph.

They were thin-walled, with attachments comprising a nose fairing and/or tail when deployed externally on an aircraft. Unless they were fitted with a parachute, they would sometimes fail to detonate if the charge was dropped from too great a height, or at too much speed.

History of Guernsey during WWII

The Channel Islands of Guernsey and Jersey were the only British territories to be occupied by German forces during WWII.

Guernsey was invaded by German troops around June 30, 1940, right up until 1945, after the British Government decided to de-militarise it.

The Channel Islands were quickly under German rule, each serving their own purpose for what became known as ‘Hitler’s Island Madness’ – because the islands became one of the most fortified places in the world.

Many of the German fortifications can still be seen around the coast of the island today.

Unfortunately many locals had their land, houses, belongings, food and freedom taken away from them. Some were given the opportunity of work by the Germans, but many refused it despite the benefits that were promised to them.

Around half of the Islands’ population including four-fifths of school children were evacuated to the UK for almost five years.

Do you need Marine UXO Services?

1st Line Defence provides UXO risk mitigation services for Marine & Offshore projects in the UK or Internationally, contact one of our Sales Team on +44 (0) 1992 245020 or email info@1stlinedefence.co.uk for more details.